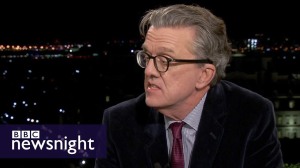 “When Donald Trump won the US presidential election in 2016, Kurt Anderson was halfway through a book that he would title Fantasyland. It put the birth of fake news and false claims into a wider historical context. Kurt Anderson argues America has long been a place where renegades and freaks came in search of freedom to create their own realities. Emily Maitlis spoke to him in Washington.”

About 46% of the vote, voted for Donald Trump for President. Not talking about Lebanon or some other country that might have an authoritarian government but is so small as well as poor that it doesn’t represent much if any threat to even its neighbors, let alone people around the world.

Fantasyland is a country where everything that Donald Trump says especially about himself, of course is true. Because again we’re talking about Fantasyland where everyday is a marijuana high. Where facts don’t matter. If Donald Trump had to operate in the real world, take Planet Earth to use as an example, he would fail miserably because he would have to deal with truth all the time. Which is generally bad about him because lack basic human values: Like commonsense, maturity, character, decency, and unfortunately I could go on but I’ll spare you.

Albert Einstein once said about the truth that: “whoever is careless with the truth in small matters cannot be trusted with important matters.” Donald Trump is a man who can’t even admit the simplest mistakes that he’s made in life. Like falling asleep one night on his phone when he was in the middle of tweeting something around 2AM. Or claiming that he had the largest crowd size ever for a presidential inauguration with the National Park Service, that was only in charge of the event contradicting the President of the United States hours later.

Donald Trump simply a man because of lack of knowledge as well as honesty, who mentally doesn’t operate in the real world. Says and sees things about himself and others that simply aren’t there. In some cases he’s simply lying, which of course is not uncommon with politicians, but in other cases he simply doesn’t know any better.

When you lose touch with reality or simply deny it and Donald Trump who is only the President of the United States unfortunately qualifies on both scores, you can’t be trusted. Because you’re dishonest and irresponsible. Anyone who trusts a dishonest person is asking to be screwed by that person: “I’m an idiot because I trust you, do your worst to me.” And the same goes with an irresponsible man who sees pigs flying in the air, three-million Americans voting illegally with absolutely no evidence to back that up.

I don’t enjoy saying these things about the President of the United States and have never been this harsh about any President including President Richard Nixon. But to quote Khaled Hosseini: “better to get hurt by the truth, than comforted with a lie.” The only way people can self-improve is to first know where they’re at fault. The only way Donald Trump could ever become an even decent President is to operate in the real world. And stop making things up and seeing things that simply don’t exist.

Read The Daily View Plus in another language

“Mistakes are your best assets. They hone your skills and develop your creativity. Don’t be afraid to make them, the more the merrier.” From Barry Kibrick Eric Metaxas the right-wing author and radio talk show host, once said when he was talking about one of his books and I’m paraphrasing: “We’re all a bunch a screw […]

Followers of The Daily View Plus

Search The Daily View Plus

Topics Covered by The Daily View

Older Posts on The Daily View Plus

Trying to find out how things work...

Sexy professional adults in action. Everything from people in Hollywood to other professions like music, biker and western culture, to fashion.

Football Stadium Digest covers major stories and events in the planning, construction and operations of NCAA and professional NFL football stadiums across the United States and Canada.

How Science and Reason Lead Humanity Toward Truth, Justice, and Freedom

The Lighter Side of Life

A study and appreciation of the films and legacy of Alfred Hitchcock (with occasional detours to other classic films).

Observer of the Near East